Things We Binged This Week: July 28

Sometimes people suggest to “go with what you know” and our picks for this week’s Things We Binged exemplify that notion. From Last Chance U to some new movies like Girls Trip, Maudie, and Dunkirk, this week resides in the comfortability of the things we know (and love best)!

Do you like Friday Night Lights? Yes? Then you have to watch this show. Last Chance U is a Netflix documentary series that chronicles the East Mississippi Community College (EMCC) football team as it fights for the junior college (JuCo) national championship. Of course, there’s so much more to it than that. The players on EMCC’s team are former division I players who were kicked off of their elite teams for various reasons (drugs, arrests, conduct, GPA, etc.). EMCC serves as rehabilitation, another chance for these players to prove that they have what it takes to play real college football and advance to the NFL.

As I’m sure you can imagine, there’s a lot of drama. You grow to love these men and root for their success as the documentary crew chronicles their relationships with each other, their coaches, and their amazing academic advisor, Brittany. The first season really focuses on the players, coaches, and academic advisor, which is absolutely riveting. The second season is able to do it all again, with a new set of players. But, this time, the show acknowledges the documentary’s success and how it has affected the players, coaches, and the little town of Scooba, Mississippi. And, to add to that, season 2 was filmed in fall of 2016 – the allusions to Black Lives Matter and the election are beautifully done.

Last Chance U consistently amazes me with its masterful editing and storytelling. They’re able to make me audibly cheer for a junior college football game from 2016. The footage they’re able to get out of a season is just incredible. Highly recommend as a weekend binge.

Last week on the blog I explained my Mad Men hesitations. I am happy to report that I’ve continued my Mad Men binge and I’m well into season 3 of the show. I’m enjoying it! Still rooting for Peggy.

You may notice a trend with my binges. I consistently binge a few shows a week, then go down some random YouTube rabbit hole that doesn’t last very long. This week’s YouTube rabbit hole is tiny house tours. They’re 10-20 minutes long, feature some hip-looking 30-something who just built their own tiny house (or school bus). They’re addicting. YouTube is such an enabler with this stuff. I’ve watched 10 and tiny house videos are now ALL of my recommended videos.  It’s better than HGTV, to be honest.

I’m not sure if all of my binge watching has made me jaded or if I’m just constantly craving quality after divulging into some incredible television, but lately there’s been some disappointments from Netflix that feel like cheap ways out. The last two weeks I’ve kindly disapproved of two new series Friends From College and Gypsy which were added to Netflix’s new release docket this summer. Last Friday their new series Ozark premiered and of course, I had my mind set on watching it. This show was a slow burn, a long day where the clock hand never seems to move, or maybe the unsettling boredom you feel when a show is just too familiar for comfort. Starring Jason Bateman and Laura Linney, Ozark centers on a financial advisor who also doubles as a drug cartel. Following its predecessors of Breaking Bad, Narcos, Bloodline, and more, Ozark takes the formula for slow paced dramas that thrive in crime and follows it accordingly. There are moments with in this show that a hint of satire slips through, and it feels like a breath of fresh air, but in my opinion the calculated format of an overused anti-hero narrative didn’t hold my attention. The tone is a dark as it’s shots and the content, but Bateman doesn’t have the charm of Bryan Cranston to bring some life to the show. The real star in this season, and in my opinion, the strongest performance is Laura Linney. I might attempt to sit through it again and remove myself from an analysis to see if it can redeem itself, but I’m not totally convinced.

2. HAIM cover Shania Twain on Triple J’s Like A Version

Just listen to this. It’s pretty incredible. I’ve had it on repeat all day and all night. 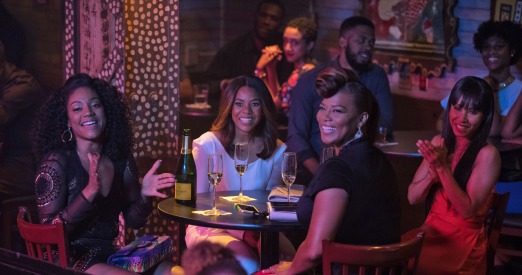 I saw three films this week. All three took on their genres with confidence, strength, and brilliant performances. Girls Trip was hands down one of the funniest films I’ve seen in the last five years. It’s also one of the realest portrayals of female friendship on screen that we’ve seen in film in a few years. Wrapped up in the comedy and party theme of the movie, the friendship between these four women, aka the Flossy Posse, presents a series of challenges that tend to be left out when writing a film about girlfriends. Struggle with fame, jealousy, failure, judgement, change, and growth, Girls Trip really hones in on the trials that can often make or break a relationship, but even when the film moves towards the messy, emotional rollercoaster, it never exploits the simple fact that these are real world problems. Tiffany Haddish was the definitive MVP of the cast and reminiscent of the lasting impression Melissa McCarthy has in her 2011 supporting role in Bridesmaids. I’m hoping there’s a great deal of praise for Haddish, because it’s more than deserved. Maudie was emotionally draining, but humbling. Sally Hawkins’ performance is vibrant, concise, and profound. It’s a shame that this film may fall off the radar, because her performance should earn her not only an Oscar nomination, but in my opinion, and automatic win. Bring some tissues, because even the coldest of hearts (i.e. myself) will soften and warm up in this film’s finale. Moving on to Dunkirk, I was hesitant about sitting through a war film directed by Nolan because I expected a signature elongated duration filled with carefully curated shots, an amazing score, and a narrative that has opportunity to be shortened in it’s length and depth. It turns out I was just being paranoid. All of the great things listed about Nolan’s signature filmmaking were there, but the film had a run time of 1:45:00. I experienced it in 70mm and I was paralyzed by its all encompassing beauty. It’s fast past, tense, and not at all cliche. It feels like a film that tells a real story, and unlike many of the films that share the genre with it which tend to wrap a love story or overwritten subnarratives about a particular character. It never sits on one character’s story either, in fact, it allows you to experience the war through various perspectives. If you have the opportunity to sit and experience the film in 70mm, please do yourself a favor and take that chance. The sound of the projector, the visual and cerebral invasion, and Hans Zimmer’s gorgeous score are some of the examples as to why I love cinema.

Honorable Mentions of the Week: