We’re both watching Freeform’s The Bold Type this week, don’t knock it ’til you try it! Also featuring: Pride, Prejudice, and Zombies, Waxahatchee’s new album, Bob’s Burgers, and an anti-recommendation, Netflix’s Gypsy.

Freeform has a new show that is inspired by the women of Cosmopolitan. I know, I know another show about young women in New York trying to make it in the everyday trials of love, friendship, work, and life, but guess what, it’s that AND more. I’m going to let Lane take this one because she actually suggested I check it out, but I’d like to briefly tackle the music supervision on the show and my shock at the quality of the show from a network I gave no credit to.

Music supervisor, Robert Lowery, has done an awesome job in the first two episodes of crafting a soundtrack that appropriately depicts the lives of the characters, the city around them, and the internal struggles that don’t always translate through actions or dialogue. The soundtrack is fun, relevant, and eclectic with features of tracks from Courtney Barnett (“History Eraser”), K.Flay (“Blood In the Cut”), Esme Patterson (“We Were Wild”), Lizzo (“Worship”), and more. It’s a music heavy show with almost every scene covered with a background track, but it never feels overwhelming or displaced. I’m excited to see where the supervision will go during the rest of the season.

On to the quality of the show, this is show that centers on women and their relationships with one another in the frame of life, work, and love. Sounds cliche, and in moments it can be, but there’s an organic dynamic portrayed in these characters that has been attempted in recent television premieres and unfortunately has never played out well. The Bold Type allows the characters to breathe and it’s development and relationships are reminiscent of other successful shows that illustrated the same portrait (Sex and the City, Girls, Broad City). Shows that missed the opportunity to achieve this are Good Girls Revolt, The Cable Girls, and GirlBoss. All of these shows desperately try to include strong, bold characters who redefine the female characters of television. Maybe don’t try so hard to let us know it’s a show about women by naming it after them and just let it exist.

I decided to rewatch this because of my recent Lily James admiration kick. Totally forgot how badass the first “fight” scene is and how charming and captivating James is in the role of Elizabeth Bennet. Now don’t get me wrong, this film is purely an entertainment view and cannot be held to high critical standard for acclaim. It’s cheesy, tropey, and sometimes strives to accomplish too much within a scene. However, I will say it’s not that bad either. It really captures the essence of Pride & Prejudice and incorporates that narrative with the bizarre concept of zombies. It also deals with strong feminist tones and the characters resonate with their literary influences. The action scenes are exhilarating, the dialogue is fresh and the timing of the humor is kind of impressive, but most of all, it’s really fun. If you’ve been following Lily James after Baby Driver, Cinderella, or even Downton Abbey, but someone missed this film, go check it out. PS: For all you Doctor Who fans, your dude Matt Smith is in it (aka Lily James’ boyfriend).

Typically, Lane and I will use our binges as an opportunity to suggest new shows and talk about the things we really enjoyed, but unfortunately, this is not one of those suggestions. Netflix’s new “thriller” Gypsy is anything but thrilling. It falls flat more often than not and it becomes as boring as it’s main character. Focusing on a therapist who is just fine with her life but wants a little bit more, Gypsy follows Jean (Naomi Watts) as she explores the lives of her patients in a true sociopath fashion. Of course it follows the overused narrative of psychoanalyst/therapist makes a career of diagnosing others but can’t diagnose themselves and so they do something extreme and all is revealed. It also does something a bit interesting that I’m not entirely sure it intended to. It shows the fracture in privilege, particularly the white privilege of the main character and her network of family and friends. This show is just not good, which is a shame because it’s a Netflix Original and it has a solid cast of Watts, Billy Crudup, Sophie Cookson, Karl Glusman, and more.  Let’s not take away from Naomi Watts’ talent here either. She does her best to bring life to Jean, but it’s a generic script with “eh” direction. Maybe it’s something you’ll enjoy, and that’s totally fine, because there are some quality moments and genuine attempts to be better than itself, but I can’t stand by this show. I’d give it a generous 5/10.

4. Waxahatchee’s Out In the Storm

The fourth album from Katie Crutchfield’s project Waxahatchee Out In the Storm is an emotional exhibition of an artist’s motion to expose herself. The lyrics woven in each track detail the heartfelt devastation, relief, confusion, etc. associated with the end of a relationship. This album is also an evolving display of maturity in Crutchfield’s sound. Track after track you can hear the rough edges of heartbreak become carefully sanded down and polished by the rich and vibrant writing.With the direct delivery of her pain, Crutchfield makes sure you not only hear her, but feel her free herself from a relationship that seemingly weighed her down. Thank you, to the person who put Katie Crutchfield in the mix of these emotions, because Out In the Storm is one of the best albums to come out this year. Favorite tracks include “Never Been Wrong”, “No Question”, “Hear You”, and “A Little More.”

Like Michelle said above, I’m all about this show. The first two episodes aired this week (on Freeform and Hulu) and, believe me, I was skeptical going in. I was pretty hooked by the promo videos I saw but I was convinced it was too good to be true, especially coming from Freeform. I assumed the NYC, 20-something, ladies magazine girls would be reduced down for middle/high school girls but, Freeform delivered.

Jane (Katie Stevens), Kat (Aisha Dee), and Meghann (Sutton Brady) are our three leading women. They started as assistants together at Scarlet (read: Cosmopolitan) magazine in NYC. They’re all either recently promoted or working to get that hard-earned promotion at the magazine. And no, they didn’t just start working there, they know their way around the company and have earned their slots.

The most interesting character so far, IMHO, is the magazine’s editor-in-chief Jacqueline (played by the fantastic Melora Hardin). You’d assume the boss lady would be a stereotypical Devil Wears Prada-type, but my assumption was, delightfully, wrong. Jacqueline pushes these women out of their comfort zone, pushes them to succeed, is a little stern but also wants the best for them, and expects them to live up to the challenge. She’s a true mentor. Melora Hardin portrays her very gracefully and it’s just so refreshing to see a female boss that isn’t confined to the “bitch” or “ditzy” category. I can’t wait to see her character grow.

The show is really pushing feminism/diversity. There could be worse things, right? They’re promoting a dialogue among the women and the characters seem relatable. The show isn’t ignoring our cultural climate and the conversations these women have about feminism, sexuality, and diversity are ostensibly conversations that I would have with friends. I’ll definitely keep watching.

I don’t think I’ve had an opportunity to talk about Bob’s Burgers on this blog yet. But, it’s my favorite. Bob’s Burgers chronicles the Belcher family (Dad/Bob, Mom/Linda, teen daughter/Tina, son/Gene, youngest daughter/Louise), a working class family that owns a burger restaurant and lives in the apartment above. They truly love and support each other and, still, have a lot of fun. I personally think it’s the best portrayal families on tv. Season 7 is fabulous, yet again, with standout episodes that individually focus on all three of the Belcher children and parents, and holiday episodes. Highly recommend any season (except 1) of this show. 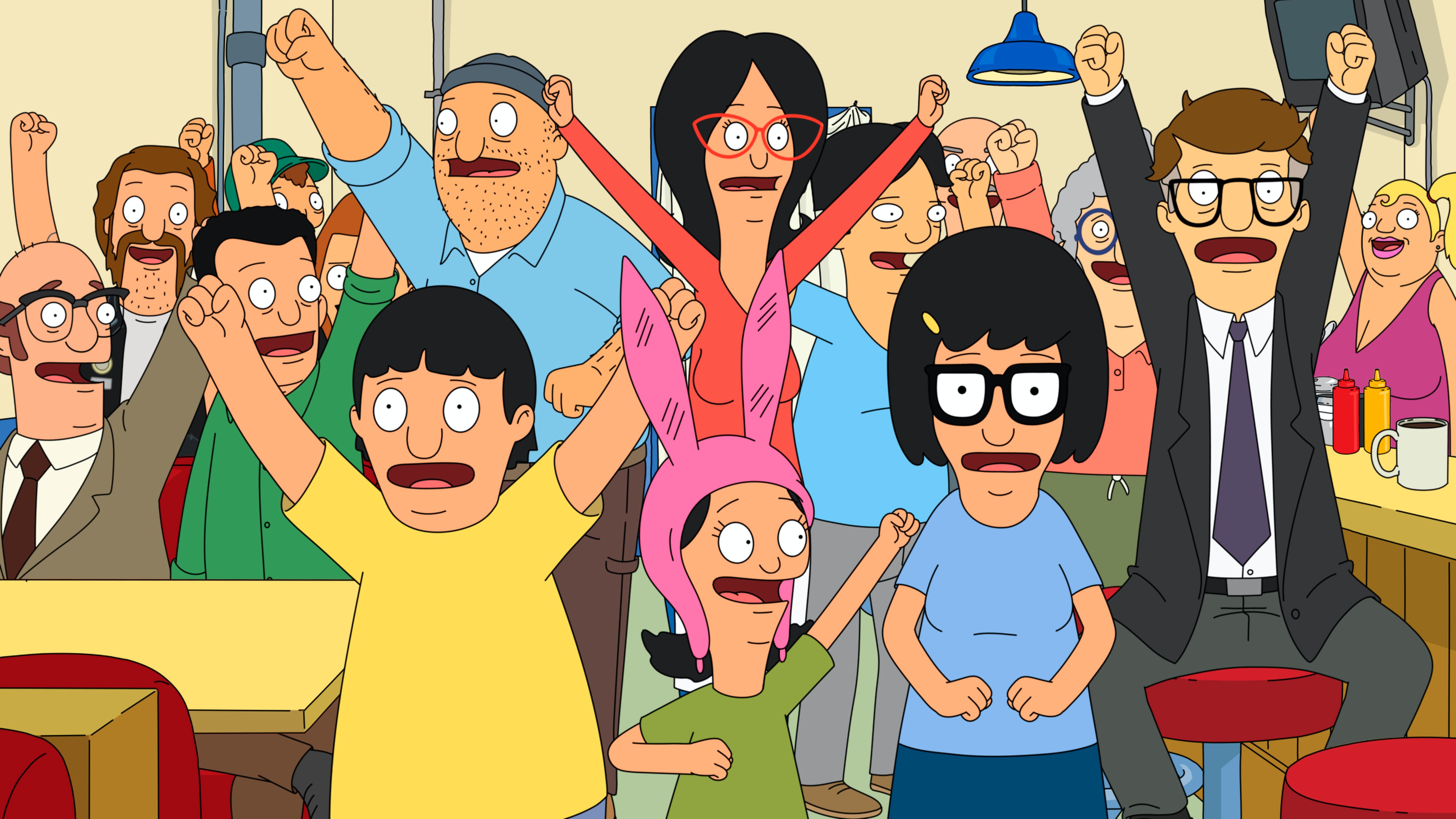