#TBT: A Trip Down Apatow Lane

Not one, but two #TBT films today that reflect the heart and soul behind them: Judd Apatow. Michelle takes on Nicholas Stoller’s Forgetting Sarah Marshall (2007) and Lane tackles Judd Apatow’s direction in Knocked Up (2007).

Forgetting Sarah Marshall centers on the devastated and recently dumped Peter Bretter (Jason Segel) who makes the decision to go to Hawaii to unwind and take some time for himself. When he arrives to the beautiful resort of his choice, he discovers that his very recent ex and famous television star Sarah Marshall (Kristen Bell) and her lover, rock star Aldous Snow (Russell Brand), are also guests. In effort to help him out with both cost and pride, front desk receptionist Rachel (Mila Kunis) informs Peter he was able to book the best suite for four days and Peter decides to go through with his vacation.

The film focuses on Peter trying to avoid Aldous and Sarah on the tiny island while recovering from his heartbreak, and in most Judd Apatow produced films, it gives us some of the best entertainment. Through Peter’s heartbreak and daily reminder of Sarah, he is able to form a relationship with Rachel, which quickly becomes romantic and special. Peter is able to grow as an individual with Rachel’s friendship, guidance, consideration, and affection. Although things get hazy for a portion of the film and Peter returns to LA, he’s able to reflect on his loneliness and tap into his creativity again. He finally takes the opportunity to focus on himself and exist for himself. It’s a film about love and heartbreak, self-discovery and redefining ourselves, friendship, creativity and exploration, and taking chances.

This film is incredibly endearing, hilarious, smart, and one that I like to return to quite often. It was speculated for some time that the film was written about Segel’s breakup from his Freaks and Geeks co-star Linda Cardellini, but he has since reported it’s a film that compiles a few breakups. The nude breakup scene between Peter and Sarah in the beginning of the film was entirely based off of a real life naked break Jason Segel had. This is key in understanding how Judd Apatow works with narratives and the creators of his long list of projects. Apatow doesn’t exploit their stories or exaggerate them for the joke, but rather he constructs and directs them so excellently that they always feel relative to the audience members, even if they can be cringeworthy. Regardless if your personal experiences align with Peter, you can feel for him and experience the film from his perspective. The same thing goes for his relationships to the other characters and those characters themselves. Some of our favorite Apatow-film stars make an appearance as some oddball characters like Paul Rudd as semi-amnesiac or maybe just spacey, surfing instructor Kunu, Jonah Hill as Aldous Snow-fanboy, hotel employee Matthew, Bill Hader as Brian, Peter’s sensible stepbrother, and more. 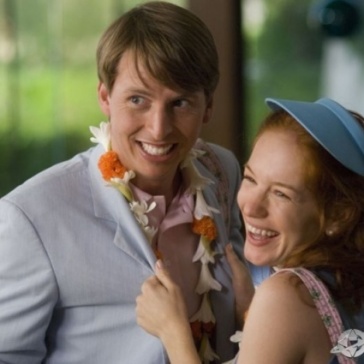 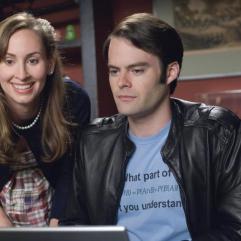 There’s a laundry list of quotable lines, ridiculous moments, unforgettable scenes, and characters that feel infinitely lovable. An incredible soundtrack and original music curated by Lyle Workman and Jason Segel, Forgetting Sarah Marshall carefully ties in the aesthetic of the film, Hawaii, the sadness of Peter’s character, and popular music on top of well-written original songs. The music for Aldous Snow’s fictional band Infant Sorrow and Peter’s rock opera about Dracula are brilliant and captivating, even when they are beaming with jokes. See Peter’s open mic performance of “Dracula’s Lament” which is my favorite scene.

If you’ve never had the pleasure of seeing this film, please do so and enjoy a couple of hours of heartwarming comedy and laughter. Forgetting Sarah Marshall is available to stream on HBO Go and HBO Now, Amazon Prime Video, iTunes, and VUDU.

Knocked Up may be my favorite Apatow film simply because it was on cable all the time when I was in high school. As I revisited the film for this blog, I still love its happy ending and emotionally-driven comedic plot. I’ve become familiar with that trope in Apatow narratives. He spoiled me because now I can’t watch a comedy without being personally invested in the plot and characters.

Semi-related hot take: Apatow is our generation’s John Hughes. Apatow films are more adult-centric (besides Superbad, of course), but both men appeal to high school comedy sensibilities AND relatable adult emotions. Of course, Apatow updated his narratives and comedy to the late 2000s, but the two creatives have an incredible track record of directing, writing, and producing.

Okay, back to Knocked Up. It’s a basic plot: one-night stand, unintended pregnancy, resulting relationship. But it makes up for its generic plot by including weird characters and character growth.

I’ll just come out and say it: I’m a Seth Rogen fan. I think he’s charming, adorable, and funny. I saw him in Knocked Up first (then went back to 40 Year-Old Virgin, Freaks and Geeks, etc.) and fell in love. I’ll admit, there is plenty of discourse about Knocked Up‘s sexist portrayal of Katherine Heigl’s character, Alison. The mismatched “beauty and the geek” (Katherine and Seth/Alison and Ben) received a lot of hate because their relationship was either “unrealistic” or “she deserved better.” But, in the end, the film actually shows character growth. Alison isn’t a perfect character either. They work for their relationship, which is one of the best qualities of Knocked Up’s narrative.

Knocked Up also includes great performances from Paul Rudd and Leslie Mann as Pete and Debbie, Alison’s sister and brother-in-law.

Recommended for a girls night in or feel-good watch. Available to buy/rent on all the normal streaming sites.

One thought on “#TBT: A Trip Down Apatow Lane”