Michelle reflects on the 2001 cult classic, Ghost World, in honor of Criterion Collection’s announcement of it’s May release of the film.

Ghost World is one of those films that I strongly recommend, regardless of your film preferences. Although it’s sixteen years old now, the film has never felt dated or irrelevant. It’s an excellent depiction of the trials of friendship and the unraveling of a bond between two people as they face adulthood post-high school graduation. Something I think more people than not can relate to.

The story centers on two best friends Enid (Thora Birch) and Rebecca (Scarlett Johansson) who have recently graduated high school, although Enid’s diploma is on hold due to failing her art class. The two friends are outcasts to their peers, and resemble a real life Daria and Jane from MTV’s Daria. They’re cynical, dry, witty, and comfortable within their “weirdness.” They tend to find little interest in anyone outside of their pair, and because of that they’ve formed a strong bond over the years. As the two approach adulthood, things start to change, as they always do. Rebecca jumps into the search for jobs and an apartment for the two of them, where Enid isn’t as enthusiastic and finds interest in a man named Seymour, who the girls pranked earlier. As they both take their focus away from one another, the divide between the two and the inevitable growth in distance begins to show.

Based on a graphic novel of the same name, Ghost World does a fantastic job at telling the story of the slow, unraveling, and decaying of a friendship, where most attempts fall short with dramatics. The film’s pace stays true to the actuality that the two friends are indeed losing grip of the thing that kept them together. It provides the natural separation in an authentic way with lack of contact, disinterested discussions, simple shrugs and one word answers, and an imbalance in chemistry between Enid and Rebecca. As the two begin to walk the plank between inclusion and exclusion, they realize that there is too big of a gap to close between them, and their lives as they know it have changed. The film does weigh it’s primary focus on Enid and her developing relationship with Seymour, but the root and most significant attention is paid to the friendship she has with Rebecca. The acting is great from the familiar faces, the pop culture references are endless, and there is quality humor seeping through the dialogue. Even after the multiple times I’ve watched it and how much older I am than their characters, Ghost World still appeals to me in the way guiding way. I still reference the film when looking back on my own relationships, style and aesthetic, attitudes towards people, etc. It’s a key representation of youth, the uncertainty of adulthood, female friendship, and finding yourself.

Ghost World is currently available to stream on HBO Now, and will be available on DVD/Blu-ray through Criterion Collection on May 30. 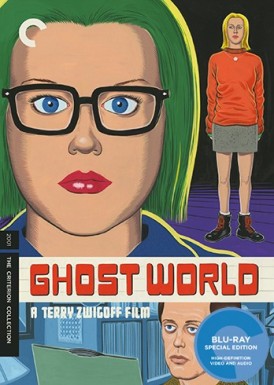